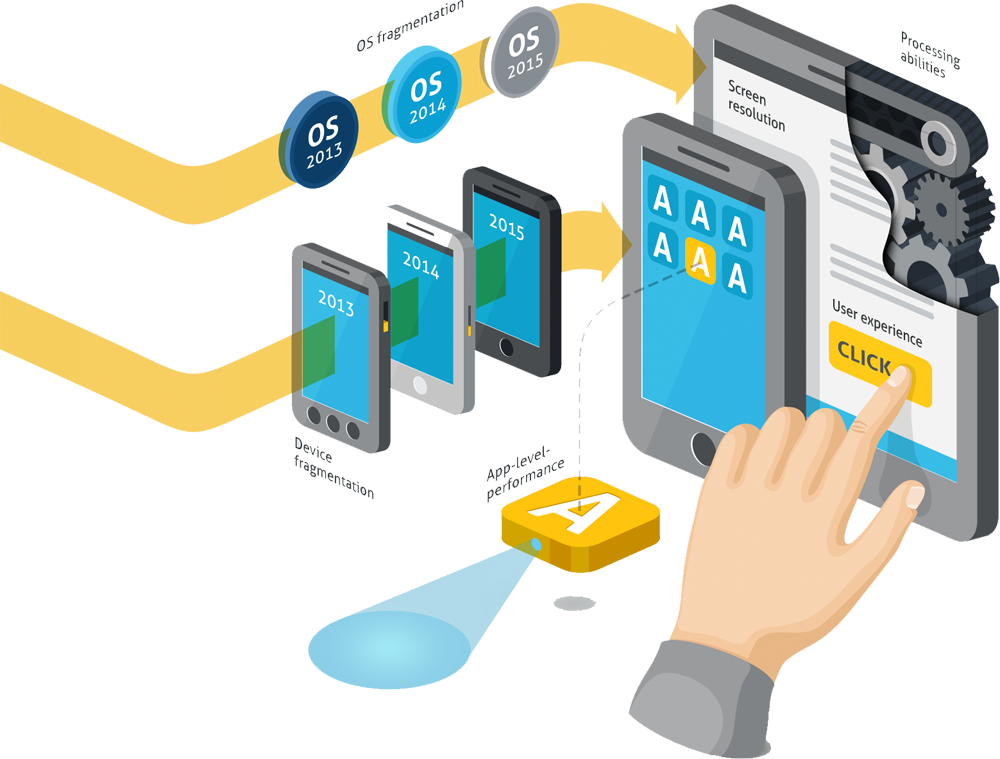 Here are 7 commandments to overcome challenges in mobile testing applications:

1. Thou shall not test without knowing the purpose and learning

The very first mistake testers tend to make is doing testing without knowing the principles of MVP, MVC, and MVVM patterns of mobile apps. For better testing, the QA team should work with developers at the start of the project and learn about the technology on which the mobile app is going to be built.
This challenge should be considered first because without knowing the purpose, you may end up designing tests that don’t quite evaluate the app’s requirements. Developers and testers need to establish business goals before starting the project, which will provide a clear idea about the development and testing processes and how to design them in the future. Also, this not only cuts down the time taken but also helps to reduce the efforts and achieve better test coverage.

2. Thou shall test everything

Many times testers have this approach where they test all the possible scenarios without prioritizing them. This practice often leads to delays in the testing process because there may be some scenarios that are similar. To streamline your testing process, you should prioritize the scenarios and tests according to requirements and their importance.

Generally, regression testing contains thousands of test cases and they take significant time to get exercise. What if you don’t have enough time to execute all the test cases to cover the maximum functionalities of an app? At this stage, you need to execute the test cases based on prioritization.

Mobile users are on the move rather than in front of a stationary computer with a fixed location. Furthermore, web applications are built for bigger screens, whereas mobile applications are optimized for smaller screens. There are other aspects you should consider if you’ve moved from web testing to mobile testing like RAM and storage limitations, keyboard vs touch-based interactions, other apps overriding, etc.

4. Thou shall provide for sufficient device coverage

As the mobile market is highly fragmented, app testing for various hardware and software combinations is one of the top challenges. This can often lead testers to miss out on lots of devices and also upcoming devices.

Despite having this challenge, It’s very important to test on various mobile devices to have a higher coverage of devices including iPhones, iPads, or Android devices. But, still, try to focus on the ones that are most typically used by your target audience.

5. Thou shall give priority to UI/UX testing at an early stage

One of the huge mistakes that could be made while testing is not considering usability testing earlier in the testing process. UI/UX provides the first look of an app to the users and hence it should be tested thoroughly. Therefore, usability testing should take its first steps at the stage of wireframing to check if all the elements take their place, communicate to users and give responses to users from the system.

You can use prototyping tools to simplify and speed up the process of testing the user interface. These tools enable developers to write code according to design. The main aim of prototypes is to check the correctness and appropriateness of the design solutions way before they will be transferred to developers.

6. Thou shall not miss network testing

Mobile apps that work in a client-server mode face connectivity challenges due to the exponential increase in data traffic, coupled with the unreliability of networks. Mobile apps are expected to function on various networks such as Wi-Fi, 4G network, or snail-paced 2.5G connections.

To keep up with such challenges, testers should ensure that every single mobile application undergoes rigorous test scenarios that take into account the “variability” on a mobile network, besides the other important performance factors. But testing mobile apps on different types of networks is challenging if done manually because it is impossible to test an app’s behavior for all the networks by sitting in one place.

To address the above challenge, testers can use network emulators. Network emulators allow you to develop realistic scenarios, which are found in real networks. It includes creating situations with data loss, errors, jitter, high latency, and low bandwidth. All this can be done without the need to have any cables or devices whatsoever. Also, you can program the replicated network as per your requirements to test an application for those situations listed above.

7. Thou shall do rigorous security testing

Now that you have read the seven commandments to overcome challenges in mobile application testing, you should check your testing activities if you miss something in your daily work. Maybe this overview will help you to enhance your mobile app testing process.