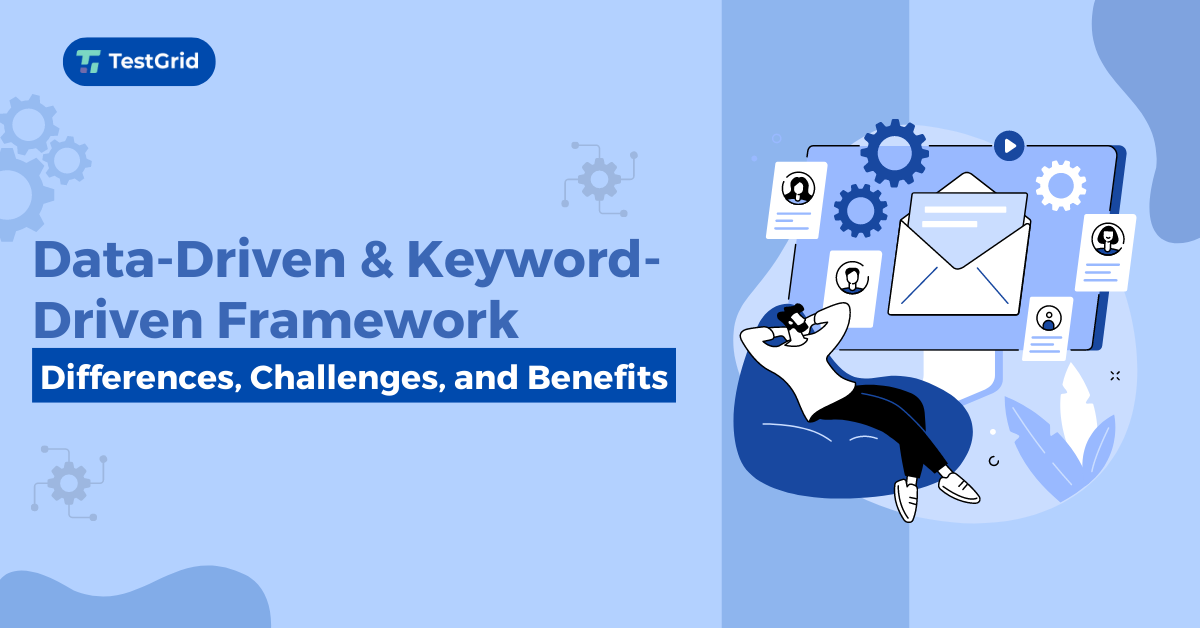 We have discussed the difference between data-driven and keyword-driven frameworks for selenium; we then discussed in detail both frameworks and which one is the best for you.

So grab a notebook and pen, jot down the essential points, and I will meet.

Data-Driven Vs. Keyword-Driven Framework For Selenium?

What is a Data-Driven Framework?

DDT or Data-Driven Testing is a software testing process that uses conditions such as verified inputs to test computer software. Various methods are used to test software, and each methodology differs from the others to maintain accuracy.

DDT focuses on a data set in databases for an automated framework where Testing is performed. Essentially, this framework resolves extensive and time-consuming process issues associated with conducting separate tests.

DDT is analogous to searching for a specific student detail in a massive dataset. In that, we only need to enter the student ID. Then, we can get all of the information about that student.

Similarly, when running this test in a large dataset, we only need to enter the verified details to get the correct execution.

Data-Driven Testing is vital as testers often have multiple data sets for a single test, and creating individual tests for each data set takes time.

They lower the cost of creating new tests and updating them as your business rules change. This is accomplished by creating parameters for various scenarios using data sets that the same code can run.

The data-driven framework makes it easier for developers to remember how something works when they need to change it.

Benefits of a Data-Driven Framework for Test Automation

How to Create a Data-Driven Automation Framework?

What is a Keyword-Driven Framework?

The keyword-driven framework is a functional automation Testing framework that is also known as table-driven Testing or action word-based testing.

The Keyword-driven testing framework is an extension of the Data-driven Testing Framework. It not only separates the test data from the scripts but also stores a specific set of code (which is basically called library functions) belonging to the test script in an external data file.

The framework is named after this set of codes known as Keywords. Keywords are self-guiding in terms of what actions should be taken on the application.

Because we use the keywords and test data in a tabular format, hence it is also known as the Table Driven Framework.

Test cases can be easier to understand, automate, and maintain if they use keywords to define test steps.

Keyword Driven Testing is a scripting technology that includes keywords related to the testing program. These keywords represent the number of steps required to complete a specific move.

Keyword-driven Testing in Selenium evaluation includes the high and low-level keywords that characterize the behavior of a test case and keyword arguments. Testing is sometimes referred to as table-driven or action word-based testing.

In software engineering, keyword-driven Testing is used for the following reasons:

How to Perform Keyword-Driven Testing?

Keyword testing can be carried out manually and automatically; however, it is most commonly associated with automated testing.

Using the keyword-driven testing approach, you can also create a simple, functional test in earlier stages of development by testing the application piece by piece.

The simplest way to create keyword-driven tests is to record them. Then, following the recording, the test could be modified and customized as needed.

Each keyword should be associated with at least one command, test script, or function that will carry out the actions associated with that keyword. For example, when test cases are run, keywords are interpreted by a test library known as a test automation framework.

Read Similar:- How to Achieve Test Optimization with Keyword-Driven Framework

Which Framework is Best for Selenium Webdriver; Data-Driven or Keyword-Driven?

The keyword-driven automation framework is the most complex and time-consuming data-driven approach to implement at first.

After all, we’re attempting to protect our tests from the numerous flaws of the automation tools and changes to the application itself.

We are essentially writing enhancements to many of the automation tool’s existing component functions, such as error correction, prevention, and enhanced synchronization.

Fortunately, this significant initial investment is mostly a one-time event. Once implemented, keyword-driven automation is arguably the simplest of the data-driven frameworks to maintain and sustain, with the most significant potential for long-term success.

If all of your testing team members are equally skilled at programming, you can use a non-keyword-driven framework.

Suppose your testing team includes members who are not good at programming but have a good understanding of the product to be tested.

Suppose you know that some product features are expected to behave differently. For example, a keyword-driven framework may be a good choice because you will only need to update the implementations of a few functions in one place rather than changing multiple test scripts.

It’s pointless to keep test data embedded in your test scripts if you know it will change. You’ll need a data-driven framework for this.

Different types of testing frameworks are appropriate for various products and teams.

Before finalizing any framework for building your product’s test automation system, it is vital to assess what you require from a framework and your team’s strengths in working with the framework.

How this article helped you understand which framework suits best for you?

With the TestGrid automation testing tool, you get many features like no code automation, AI automation, cloud infrastructure, etc.

TestGrid is one of the best automation testing tools in the industry and provides the best value for money.