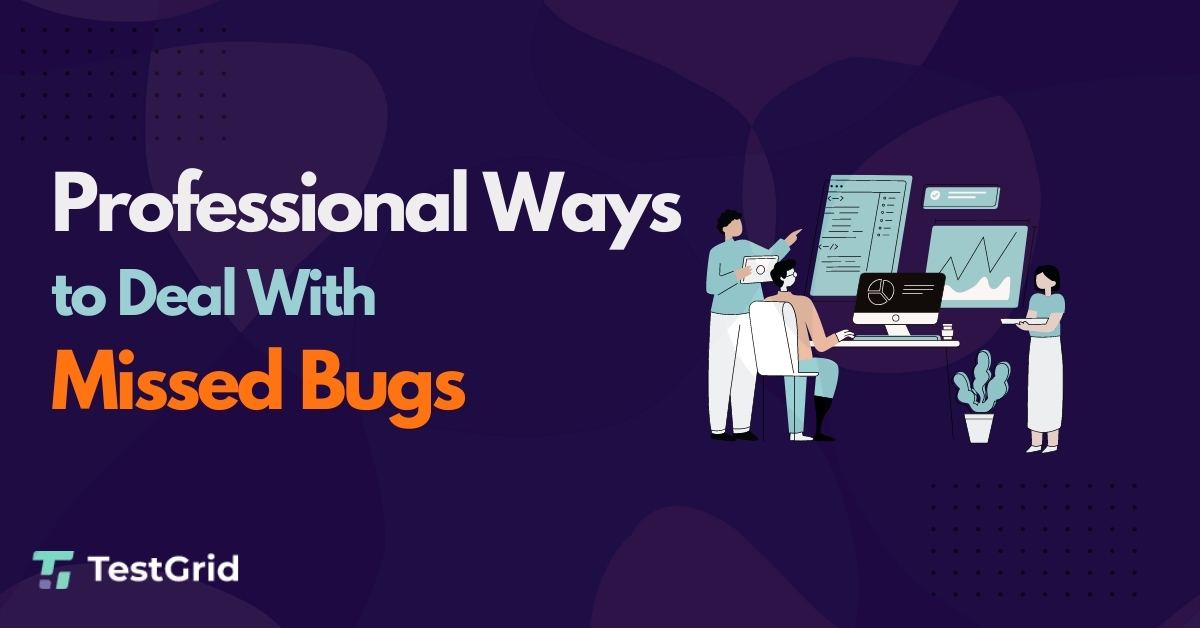 Software testers work hard to ensure no bugs in the software that developers created, but sometimes they miss one or two anyway and it becomes a tedious task to deal with missed bugs.

If you’re building software that will be used by other people (and who isn’t?), you need to know how to deal with missed bugs without losing your mind or burning bridges with your colleagues and clients.

In software development, missed bugs are inevitable due to time constraints, deadlines, and the ever-changing nature of the software environment.

Missed bugs can wreak havoc on schedules, budgets, and reputations, so it’s important to have an action plan for dealing with them when they come up in testing or production environments.

Let us discuss how to deal with missed bugs as quickly and professionally.

Sometimes developers missed some bugs while testing software. But you can easily deal with missed bugs in that simple ways.

So here are the 5 best ways to deal with missed bugs.

1. You Should Keep Calm to Deal With Missed Bugs:

The first thing you need to do is remain calm. It includes taking a deep breath and waiting for your reviewer or manager to finish speaking before replying.

After all, a conversation is meant to be two-way, and it’s hard for two people to have that if one of them feels rushed or cut off when responding.

If possible, try to find out what happened to understand better how things could be improved in the future. For example, you might suggest more thorough testing if a bug was missed because someone wasn’t testing on an appropriate platform.

If there was a miscommunication about requirements or timing issues, these should be addressed.

2. Check more than Once:

With so many moving parts, the software can fail in countless ways. Unfortunately, there’s no way around it. It’s just part of working in an industry that makes software.

And although it can be difficult, missing a bug is entirely possible—and we should acknowledge it as a possibility and learn how to deal with missed bugs when they happen.

If you don’t know where your error came from or what went wrong, check more than once. Often there are hints within the code itself that can help you find an area that may need attention.

For example, is your variable set?

Is your function called appropriately?

Check for errors when in doubt about why something isn’t working as expected!

When dealing with a bug, Usually follow these steps:

3. Learn from Your Mistakes:

When you’re testing a new feature or implementing a newly-designed system, getting caught up in your assumptions about how something should work is easy.

The trouble is that things don’t always go according to plan when it comes to real-world users, including significant problems.

Rather than getting frustrated or upset by these snags and not knowing what went wrong, look at them as opportunities for learning about your users.

What were their expectations?

What did they think was supposed to happen?

Use those answers to improve future iterations of your product.

If you can find out why someone didn’t follow through on an action or couldn’t complete a task, then figure out how to make that easier for other people. As much as possible, try and view every problem through the user’s eyes.

If something goes wrong because of an assumption on your part, consider ways you could change it to work better without taking away from the user experience.

You can think of ways to avoid similar mistakes in the future.

Decision-makers and executives believe testers are responsible for missed bugs or quality is the sole responsibility because they are ignorant of testing and the role of a tester.

The first step to establishing a testing culture is educating your organization about testing by debunking common myths.

Software testers are responsible for exploring, investigating, learning, analyzing the software, providing data about the risks to the business, and helping companies make informed decisions.

Some executives and managers still adhere to the old-school attitude that testers are quality police. They can see that everyone has their responsibilities in a project. Everyone else can be cautious and take conscious steps during the project’s development to avoid these bugs.

Still, they’re clueless about getting developers, product managers, and other non-testers to work on testing.

As a tester, coaching your entire team to participate in software testing tasks is one of my duties.

Yes, bugs happen, but that is when the consequences of having them can take a toll on the business.

It is imperative to create a rollback strategy before releasing it to production to prevent or reduce the risk of it negatively impacting the business.

Employ a shift-right strategy or any other available rollback strategy to reduce the risk in case of a defect.

1. Feature Flag – If a new feature needs some testing or something goes wrong, there’s a more straightforward way to put it on pause without the deployment of new code.

2. Utilize staged rollouts – Make the update available to a select group of people before releasing it to everyone else.

3. Blue-Green Deployments – Operates two identical production environments that are named Blue as well as Green. At any given moment, only one of the two environments is operational and can handle production traffic.

While Blue is live, green is not, and vice versa. Let’s suppose that Blue is currently serving the traffic. If you are releasing the new https://getzonedup.com/tdcs/ feature, it is possible to deploy and test it safely using Green (which is inactive).

After testing is completed, it is possible to switch all traffic coming into Green. After that, Blue is turned off.

This method reduces the chance of having an issue: If something unusual happens to the new feature you have added on Green, it is possible to immediately return to the previous version, changing back to Blue.

4. A/B testing – Group your customers into two groups (e.g., free and premium). One group gets the new version of the software, while the other group remains in the older version.

Monitor production until you feel comfortable and only then release the updated version of the software to the higher-paying customers. One way to cope with bugs is to plan and minimize their impact.

5. Beta testing – Allow early adopters to try out the application in a real-world environment.

Send it off in Good Condition:

When it comes to QA, the most essential thing you can do is give yourself and your product a chance. Send off clean builds in working order; no matter how great your bug tracking system is, bugs won’t be caught if they aren’t visible.

The best way to avoid missed bugs is to keep communication lines open between everyone involved in development—customers, managers, testers, and developers alike.

There should be a power balance between these groups so that no one group has more control and a healthy respect for one another’s roles.

Overlooked bugs can hurt a company’s reputation and revenue. As IT professionals, we must learn how to deal with missed bugs and fix them quickly—no matter how small or large they are.

In some ways, it’s easier for us because we have tools at our disposal that can speed up processes. While having all these valuable tools is excellent, it makes it possible to be a little less thorough during our testing procedures.

This list of strategies should help you avoid overlooked bugs in your next project. Good luck!