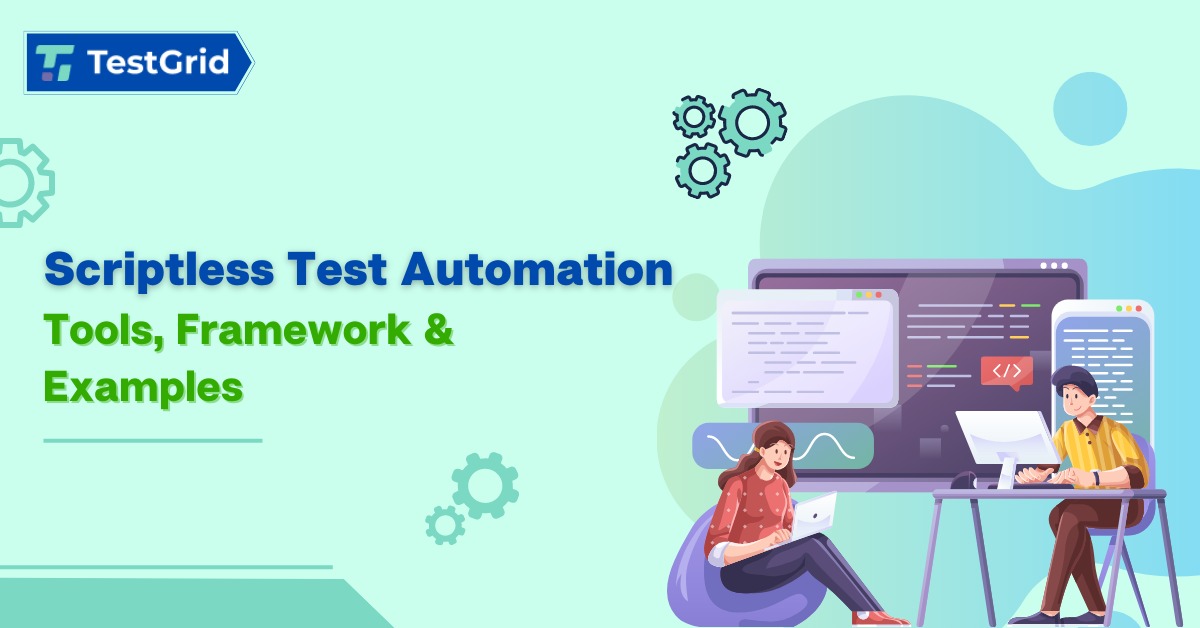 This article will provide a detailed overview of the Scriptless Automation Framework. What, Which, and Why of scriptless automation testing framework, so read it till the end and meet you at the conclusion.

What Is Scriptless Test Automation Framework?

It allows for faster results and reduces the time required to understand the code. As a result, the entire software development process can be sped up with the Scriptless test automation approach.

The method enables enterprises to participate in test automation while expanding the code reusability scope.

Adopting the scriptless framework will help development teams overcome the most difficult challenge of spending more time on script development. Furthermore, the methodology assists enterprises in reducing the complexity of test automation.

This approach to automation will not only help businesses save time and money, but it will also ensure that their requirements are met with quality and ease.

The record and playback method is the most common scriptless testing method. This procedure entails recording on-screen tests and then replaying them as an automated test.

The test steps are created simultaneously when the tester prompts the online application in record and playback. Furthermore, if desired, a tester can use a browser to run these test procedures.

While recording a workflow, the scriptless automation tool automatically identifies each step, saves the object locators for each element, and links action to it. Finally, the linked action is performed on the saved object locator when the recorded steps are executed.

Furthermore, a recorded test can be used as a reusable workflow in most of the latest scriptless automation tools and can be reused in other tests to reduce test length and simplify maintenance.

Scriptless test automation can drastically reduce the amount of time it takes to automate tests. It enables even the most complex test suites to be automated quickly and easily.

Because automation takes far less time to create, the testing team has more time to focus on other essential tasks. Compared to a traditional approach, the group will be able to identify issues and glitches earlier in the software development life cycle.

Unlike the traditional method of applying tests, scriptless test automation has no issues with human errors. As a result, mistakes in manual testing can easily result in missed issues and bugs being introduced into the final product.

Testing software can be highly accurate with scriptless automation, reducing the chances of an error occurring.

Teams can avoid additional costs associated with augmented script maintenance efforts if they use an approach that incorporates a more innovative framework design from the start.

For example, scriptless test automation makes little use of scripts, allowing it to avoid many of the technical responsibilities that come with them.

Firms won’t have to deal with the drawbacks of not knowing technical aspects like integration and coding if they use scriptless test automation. Instead, testers only need to write and run their test cases to get the required results.

Companies can save a lot of money by using scriptless test automation because they won’t need to hire programming resources or experts to train their testers.

This is because scriptless tools are intended to be straightforward to use. For example, manual testers can use these systems to create scripts using actions and objects.

Scriptless automation will be more efficient for test automation and quality assurance providers because it eliminates the need to code using specific tools. This means businesses won’t have to rely on the standard automation testing tools available today.

Furthermore, scriptless test automation makes it easier to keep track of all of the test suites. It is a simple way to incorporate automated testing into the development process.

Changing test suites becomes easier with scriptless test automation, resulting in increased agility and response time. When compared to other types of testing, this makes it highly reliable.

They also make the testing process more manageable and accessible by reducing the time it takes to test an application to keep up with Agile development and deliver software reliably.

Testing can be done concurrently with development, resulting in a more efficient QA process at the end of the SDLC.

Adding scriptless test automation to one’s toolkit eliminates the need for testing teams to learn a specific coding language that is limited to a few systems.

Basic English and an understanding of software testing logic are frequently the essential requirements with a scriptless framework. When going through test cases, teams don’t have to write a single line of code by hand.

Read more: Why Scriptless Automated Testing is the Need of the Hour?

Which Framework Is Used For Automation Testing?

Some of the Popular Test Automation Frameworks used by Developers Across the Globe:

It is simpler to write and maintain the tests. In addition, it has a powerful built-in synchronization system that works with the user interface, animations, network requests, and more.

Cucumber is a behaviour-driven tool that is primarily used to create web application acceptance tests.

It provides users with a quick and uncomplicated setup to get started with and the ability to reuse code across multiple tests. The framework was originally written in Ruby, but it has now been ported to Java.

Appium is primarily intended for the testing of mobile applications. It’s built in a way that you won’t have to recompile or modify your app in any way to run the tests. Instead, it’s a cross-platform framework that uses the same API to run on different platforms.

This is one of the most widely used test automation frameworks for acceptance tests and test-driven development. It’s a cross-platform framework that makes tabular test data syntax simple. Easy integration, detailed logs, and clear testing reports are all possible with the framework.

Gauge is a cutting-edge lightweight testing automation tool with cross-platform capabilities. It uses a data-driven execution method and has a simple, rich, and flexible syntax.

This framework’s test cases are simple to understand and maintain, and it has a modular architecture that allows for highly extensible plugins.

The Selenium framework is the most widely used automation framework structure that improves test productivity by increasing code readability.

To test how efficiently a web page can run, the ‘test case’ and ‘data’ are kept separate from each other. Test cases from an external source can also be executed using Selenium automation frameworks.

Which Testing Framework Is Best?

Any development team nowadays must have a good test automation framework. It should provide a stable and dependable environment for high-volume software testing.

There are several must-haves for test automation frameworks to ensure efficiency and reliability. Portability, documentation, scalability, usability, and compatibility with various platforms/devices/OSes are just a few of the requirements.

So there is no one good automation testing framework. It depends on the requirement of your team; we have already mentioned some of the most used frameworks in the industry so that you can take a look at those frameworks first.

6 Best Tool For Scriptless Test Automation Every Tester Should Know

AccelQ is a codeless test automation tool powered by AI that checks all the boxes for being an ideal solution.

AccelQ can speed up the testing cycle by automating web, desktop, mainframe, and other applications with minimal time and effort. With its Natural English Coding and Self-Healing Capabilities, AccelQ attracts the attention of testing and Agile teams.

It can be used in conjunction with existing DevOps and Quality toolchains to provide a unified view of the entire Quality Engineering lifecycle.

AccelQ provides a simple and quick-to-develop UI to ensure a true Codeless experience for business users and domain specialists.

Thanks to features like Natural Language Programming, Intelligent Element Explorer, Extendible & Open Source Alignment, and Automated Test Generation, it is an instant hit among organizations.

Testim is an AI-based testing platform that runs from beginning to end. It addresses two of the most pressing testing issues: slow authoring and unstable tests due to rapid releases, UI changes, and other factors.

The Dynamic and Smart locators automatically generate and run tests based on any changes in the Application Under Test (AUT). In addition, Testim creates, executes, and maintains tests using Machine Learning capabilities.

Testim is a one-size-fits-all solution with fully customizable functionality. Testim provides ‘Shift-Left’ by allowing developers and testers to work on separate branches without overwriting each other’s changes.

The platform makes it simple, stable, and collaborative to automate tests. According to users, it fulfills all of the requirements for a perfect codeless testing platform.

The accolades are the reason it is ranked first on our list. Katalon is a popular choice for testing APIs, Web, Mobile, and Desktop applications because of its extensive testing capabilities. The features of Katalon studio are simple to use for both novice and experienced testers.

For business users and testing experts, Katalon has a user-friendly interface. It’s a true Codeless test automation tool because it has record and playback capabilities and drag-and-drop commands.

As a result, testers can import external testing libraries and delegate execution to the tool, obviating the need to create a framework from the ground up.

The platform claims to be more than just a record and playback tool, offering a complete end-to-end testing experience.

Regression testing suites can be quickly created and scheduled using the built-in reporting tools, which can also be used to develop, build, maintain, and execute tests.

It is a plugin for the Chrome and Firefox browsers and allows for cross-browser execution via the Command-line Runner for Selenium IDE.

It can record multiple locators for each element with which it interacts. Test cases written in Selenium IDE are reusable.

Perfecto is yet another top testing platform for web and mobile applications. It is a cloud-based automation solution for mobile and web application testing that supports many devices, browsers, and operating systems.

Perfecto has AI capabilities for error classification and self-healing features to continuously update test scripts and run them with minimal maintenance.

Perfecto aims to improve digital experiences by enhancing continuous testing in the CI/CD processes. The cloud-based feature enables testers to collaborate from any location. In the early stages of SDLC, the advanced reporting capabilities ensure bug capture and detailed analysis of fixes.

You should have gleaned from this article that creating a code-less or script-less automation framework is a challenging but rewarding task.

Such frameworks can be created for any type of application testing, including web-based, mobile apps, Web services, GUI, databases, and embedded device applications.

However, extreme caution should be exercised to create a stable, reliable, and high-performing tool.

This is simply a word of caution in selecting the appropriate technology and scripting/programming language to create an excellent and helpful framework.

TestGrid automation tool provides the best value and ROI in the market and has tons of features, and more and more features and updates are provided every time according to industry standards. Our developers work 24/7 to provide the best value for our consumers.

So Start with Why and start your search for the scriptless automation testing tool with TestGrid.