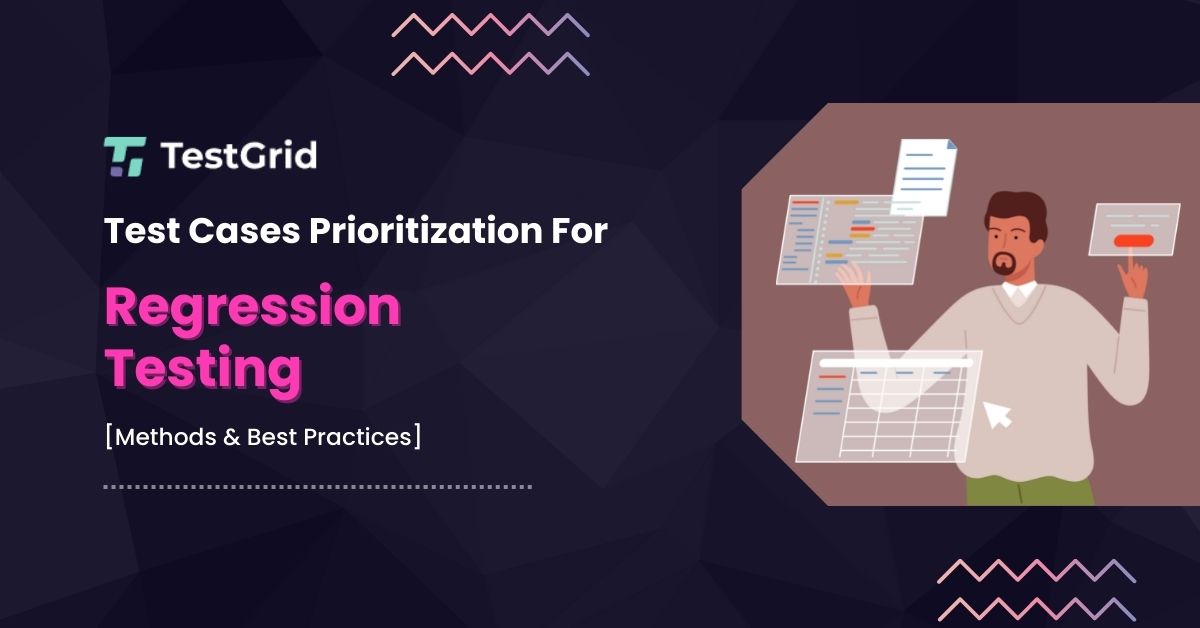 One of the most critical software development and maintenance aspects is regression testing. To avoid unwanted changes, a set of test cases is run whenever software is modified, and the new outputs are compared to the older ones.

If the new and old outputs match, it means that the changes made in one part of the software do not affect the remaining software.

If changes occur, it is impractical to re-run every test case for a program. However, selecting regression test cases can be solved by prioritizing the test cases.

For example, regression test prioritization techniques reorder the execution of a test suite to detect flaws earlier in the testing process.

Therefore, prioritizing test cases is crucial so that we execute test cases with the highest priority and are completed first.

The test cases for regression testing are prioritized based on the business requirements, previous test cycle experience on the functionality of existing features, and delivery timelines.

In this article, we will learn about Test Case Prioritization In Regression Testing, so read the article carefully and meet you at the conclusion.

Why Do We Need To Prioritize Test Cases For Regression Testing?

How Should One Choose Test Cases For Regression According To Priority?

Regression testing is the last yet essential phase before software or updates are released in the market. Delays can result in negative marketing, missed deadlines, and regenerate customers. Test case prioritization in regression testing based on time and importance, on the other hand, will ensure that a test cycle is completed on time.

Many system functions rely on complex pathways involving GUI sequences. As a result, sequencing issues can arise as the system becomes more complex. As a result, complex test cases must also be covered in regression tests.

Most experts recommend using a risk-based testing approach, in which test cases are ranked based on certain factors and then prioritized. These prioritized tests save time, effort, and money.

Test Cases Are Divided Into Two Categories For Ease Of Use:

During the production cycle, test cases that fail frequently can be identified. These test cases cover areas of the software that are frequently fragile and frequently fail after a change. These cases must be prioritized and incorporated into the regression test suite.

A selection of negative test cases covering field validations. If we fail to enter the details of a mandatory field in a form, the application displays an error message preventing the user from proceeding to the next section.

The core aspects of the software can be identified based on the business requirements document. For example, make sure that the regression test includes all of the test cases that cover these core functions. A traceability matrix can also be used to gather all high-priority cases.

Many parts of the software are updated regularly. However, these components are more prone to flaws. As a result, you should incorporate them into your regression suite. Include test cases for recently changed functionalities as well.

In practice, integration tests are housed in their own module. However, it is critical to include them in the regression suite as well to ensure that no last-minute changes disrupt the flow between modules.

Here we can cover all of the end-to-end integration test cases in which the happy flows of a module are tested from start to finish.

Read also: A comprehensive and Educative Guide on Regression Testing

How Test Cases Can Be Prioritized Based On A Certain Technique

These three variables are used in the ant colony optimization algorithm to help identify more severe flaws earlier in the regression testing process.

Ontology-based approaches can bring together a variety of software artifacts. They can also describe software design and testing while adhering to the complete set of semantic rules.

They are widely used to meet the needs of automation and decision-making. Prior research has focused on TCP aspects such as codes, requirements, risks, etc. However, there has been little research into identifying software system defects using test case prioritization based on ontologies.

Ontology is a rigorous and formal approach to knowledge representation that provides terms with precise and unambiguous semantics.

Ontologies in software testing provide a shared knowledge understanding of concerned entities and their relationships, allowing the easy organization, maintenance, and updates.

Factors to be Considered for Test Case Prioritization for Regression Testing

Many factors can influence test case selection and prioritization. In our proposed algorithm, three factors are considered for prioritizing the test cases, and these factors are discussed below :

A test case covers one or more flaws in its execution. For example, a test case’s fault coverage capacity indicates the number of faults it can detect.

#02 The Execution Time Of A Test Case

#03 The Severity Of The Fault

Different faults have different effects on the same software, and the severity of the fault determines its acceptance. Therefore, the test case revealing more severe faults should be executed earlier to find more severe faults during the early testing phase.

Another factor is the fault detection rate, which measures how quickly a test case detects faults. It is calculated using the number of faults detected and the time it takes to find them for each test case.

Test case prioritization enables testers to categorize test cases according to their highest and lowest priority to execute tests efficiently.

This leads to the consistent delivery of high-quality software. Users also love regular updates and proper time software delivery, which leads to a better impression in the market.

But the best way for regression testing, especially when you have a large number of regression test cases to test, is to automate them can solve a lot of problems. And if the automated test cases can be prioritized, this can result in a significant return on investment.

Automation testing tools save your time, effort, and money and provide the best ROI.

Keywords for creating and executing automation testing are required in TestGrid. TestGrid automation tool is bundled with tons of features.